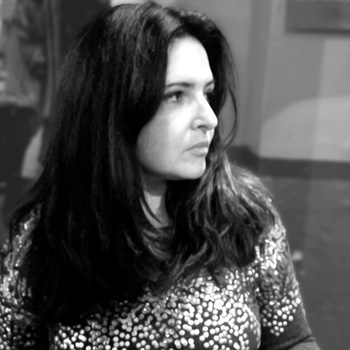 Joana Caldeira (Art Director & Lead Designer)
Joana Caldeira studied jewellery and finished her studies, with honours, at Escuela Massana (Barcelona).
She won the Young Creator’s Prize in 1999 and in 2004 she successfully started Projecto Leveza, which aimed to recover the traditional filigree industry in the North of Portugal.
In 2006 she designed the silver and gold jewellery for Jasper Conran to be sold at the Jasper Conran flagship store. Between 2005 and 2010 she was resident designer at the Museum of Gold in Travassos and participated in design exhibitions alongside world famous jewellers, artists, and even architects. She also owned a jewellery shop, Olho de Perdiz, through which she developed exclusive designs. Her past work is part of the study curricula of the Masters Degree in Jewellery Design of the Portuguese Catholic University.
Since 2012 she is working exclusively on the Eukarya project.

Miguel de Sousa (Chief Director)
A Biochemistry graduate with a M.Sc. in Photochemistry. In addition to his work as director at Eukarya, he is responsible for the administration of the estate and legacy of his father, the late Portuguese artist Ângelo de Sousa, and is also working on a Ph.D. thesis in the field of Bioinformatics.